Plessey Players was formed in 1992 by a group of members of the Plessey Sports and Social Club seeking to raise funds for the club.

Sunday rehearsals of the first production, Aladdin, began that year and production took place on the dance floor in the New Year.

Inspired by the rapturous reception their show received, the group built a stage from pallets for the next production, Dick Whittington. That stage continued in use until 1999. A stronger and much improved stage was built for the 2000 production of Puss in Boots, and this continues in use today. Every year, on the Saturday before opening night, an army of eager volunteers descends on the club to build the stage and transform the lounge into a theatre for the week. The following Sunday the whole lot is dismantled and lovingly packed away until the next year.

Following the change in name and status of the club, to Isle of Wight Community Club, the Plessey Players became the Panto Players. Some of the members from those early years are still active with the group and over the years many more, of all ages, have joined.

In 2008 we were able to take over the old table tennis room which has now become our own rehearsal room enabling us to hold rehearsals even when there are other activities in the club lounge.

The 1999 stage gave sterling service over the years but it was very heavy and needed a good strong workforce to assemble it. A new more lightweight stage makes its debut with the 2017 production of Little Red Riding Hood. First impressions are that it is superior in every way and should give service for very many years to come.

New members of all ages (both performers and backstage help) are always needed, and will be made very welcome. If you would like to join, please click here.

2003 Jack and the Beanstalk 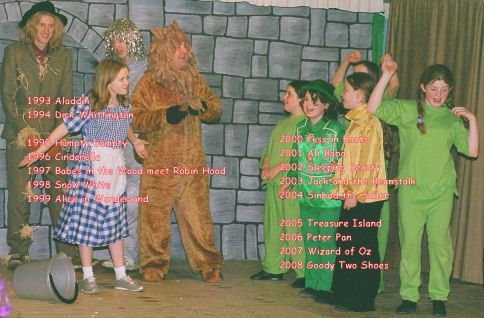